The following recalls how I became best friends with some awesome dogs, enjoy 🙂

Sometime in the late 60’s, my sister asked my Mom if she could get a dog.  My sister was likely around 10 to her early teens.  My Mom said sure if we ever have another baby. There were already three children in the D’Arcy household and my older brother was born in 1959 so the chances of them having another baby were slim to none.  My Mom was also getting older and likely figured that it was a safe thing to say.

When I was around 5 or so, my sister asked again and was told she could adopt a dog – she had a thing for Dalmatians, still does. It turned out that I came up with the name for this new dog, Brandy.

So, Brandy was the first dog in my life. We didn’t have her for what I could consider a long time, only until I was around 12 or so.  She was a good dog, very loyal and very protective of the family. I used to take her for walks – back in the day, if she pooped, you’d just leave it where it was – no one thought anything of it.  Can you imagine doing that now?

Anyway, Brandy started me on course to being a dog person.  Thanks, Brandy and thanks JB for wanting a dog – it is ALL actually your fault 🙂

As I noted above, Brandy was the family dog while I was growing up. She wasn’t my dog originally but then my sister moved out and she essentially became my dog.  She was a good dog, but had problems in her later years – a major skin condition, I am not sure what. My Mom had her put down when I was around 12 or so, she didn’t tell my sister and I am told my sister didn’t talk to her for months. I was sad that I was unable to say goodbye.

As an adult, I didn’t really think I would get my own dog.  I really liked going to my sister’s house and playing with her dogs – she has always had Dalmatians.  Brandy, Dottie, Daisy, and Chloe.  All good dogs and all loved me as part of their family.

In 2006, in late July, one of my co-workers found a stray dog and brought it to the Humane Society in Welland, Ontario.  She wanted me to adopt it, even though I told her I had no intention of adopting a dog.  She was going to go and visit it in the Humane Society so I agreed to go along.  I didn’t really like the dog that she rescued, it didn’t seem to like me either.  However, there was one dog that I did like:

Iggy, they were calling him.  All of the dogs that were there were barking like crazy where Iggy was being quiet and smiling away.  Not that I would EVER repeat myself, I have already told the Story of Zeus, so please read it there.

Zeus was a great dog, BUT, he didn’t really like other dogs. He did, however, seem to like smaller dogs and if they were bigger dogs, they had better be “blonde” coloured.  I saw an ad on the buy/sell electronic board at work.  She was the runt of the litter and the last one left – they wanted her to go and reduced her price to $200.  The rest is history – The Story of Blondie. 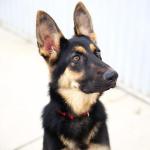 After Zeus died, Blondie and I were definitely in a state of mourning.  Blondie had never spent a day of her life without a dog around.  First, it was her mother and brothers and sisters and then it was Zeus.  Blondie taught Zeus tolerance and unconditional love, she loved Zeus from the moment she met him.  It took Blondie a few weeks before she was back to normal after Zeus died.  I had said that I was considering getting a new dog, but I was going to wait until after my trip to Ontario in September.  I also said that I was considering a small dog.  Well, it is only the middle of July and Hera is NOT a small dog.  However, we are happy to have her as part of the family.  Here is Hera’s Story.

When I moved in December, I joined a pet-oriented page on Facebook where people would offer items and sometimes pets for sale.  I wasn’t really looking for a new companion, I already have two dogs and only insane single people have more than two, right?  Well, I saw a posting for a Golden Retriever, older puppy, just under a year old.  I enquired and the owner responded, we went back and forth a few times and she said she’d contact me.  She never did…  I hope the dog found a good home.  This past Friday (Jan 13), I saw a posting for a dog needing a new home, Twix.  I messaged the owner and asked a few questions, she told me her husband would contact me.  Shortly after, he did. Here is Twix’s Story.