I guess I have not had much of the Blogging bug of late.  That’s OK, I guess I don’t have a lot to say.

We are in the second week of December, already.  I put up my majestic Christmas Tree last Saturday (Dec 1) to prepare for the festive season: 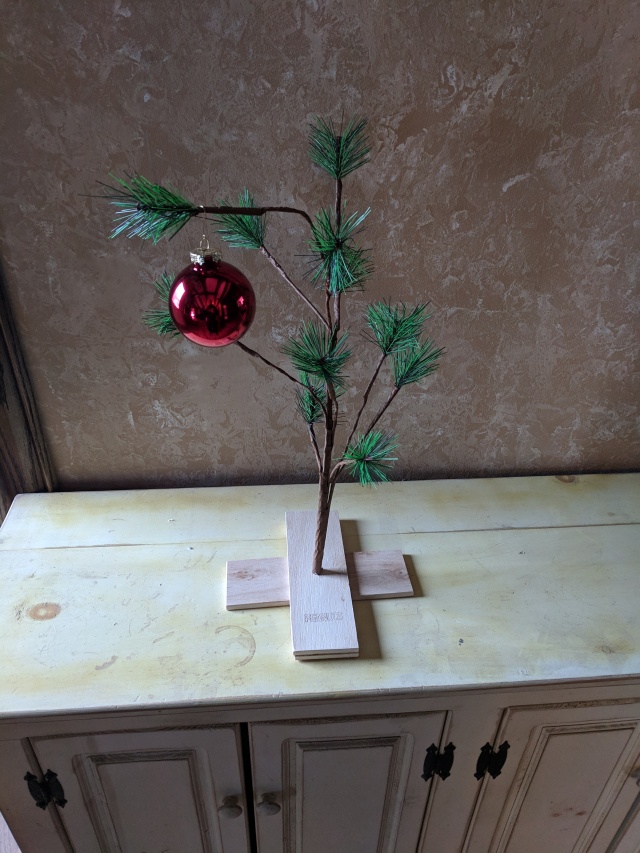 Yes, a Charlie Brown Christmas Tree.  This is about as festive as I get.  🙂  Since I have a fireplace with a mantle now, I do want to get some stockings for the dogs and hang them on the mantle, I’ve always wanted to do that.

The weather has been pretty tame, thus far.  We aren’t in winter yet, but other than the snowstorm back at the beginning of October, it’s been pretty good weather.  Well, other than last Wednesday when I wanted to head to the Lethbridge office for work.

I checked the forecast starting a few days before Wednesday and it called for clear and dry, 20% chance of 1cm of snow.  I was up early (2am) on Wednesday and checked again, same forecast.  So, 6am arrives and I head out.  I made a pit-stop at the 7/11 in town.  About 10km or so out of town, I hit an absolute wall of snow.  It went from clear and dry conditions to at least 6″ of snow on the ground and snowing so heavily that I could not see where I was going.  The cruise was locked in at 106kph, I didn’t dare hit the brakes, I wasn’t sure what was under the snow, so I coasted down to a far safer 50kph.  I couldn’t tell where the car was on the road.  The rumble strips on the shoulder and center were covered in snow.  I continued on for a bit, up until highway 22 and decided to turn around and head home.  The route between there and Fort McCleod is hilly and if road conditions didn’t improve, well, there was no way I wanted to be driving in it.

All in all, from my place to highway 22 and back is about 60km.  It took me 1.5 hours to make that trip.  At home, in the mountains, we got a dusting of snow that the wind took care of.  Not worth getting into an accident to head to the office for the day.  The trip has been rescheduled for Friday.  Weather permitting, of course.

Christmas plans are set.  A friend of mine will be coming down and spending a few days with the dogs and I.  They love him so they’ll be happy to see him, I am sure.  My buddy who runs a restaurant in the Pass is closing and returning to the UK, so he’s having a closing down party on the 23rd, we will both go.  I will miss him and his excellent food and I wish him all the best for the future.

Only 2 more working weeks until the Christmas break.  I am working during the holidays, but it is pretty dead at work as most of the offices are closed.  It will be a nice break.

Well, this is my BLOG, so, read the BLOG !!!
View all posts by kdarcy21 →
This entry was posted in My Dogs, Personal, Work. Bookmark the permalink.