It has been a few busy days, not because of baseball though.  Well, not exactly busy really, but sort of.

First off, the weather.  Well, to put it mildly, it sucks.  A week ago (Saturday, May 14) we were scheduled to play the Canadian Thunderbirds in a 9 inning game at Alex McKenzie Park.  The weather for the day was supposed to only be a 40% chance of rain and only 1-2mm.  Well, the two games on before us played without any issues at all.  I start my infield with the boys and it starts to rain.  We got our infield done and it starts to pour.  Long story short (or a bit shorter anyway), we pitched to 3 batters and the game was called shortly thereafter.  Our game on Sunday, May 15 was cancelled as of the Saturday night.  The parks have been closed since AND are closed until Tuesday, May 24.  Insane weather, completely insane.  We haven’t had baseball in over a week now.  I am hoping for good weather on Monday.  We have a practice scheduled and then an exhibition game versus the Niagara Falls Minor Midget Falcons.  Diamonds are closed so we are breaking the rules a bit and are going to use AN Myer in Niagara Falls.  Won’t be the best diamond, hopefully the outfield will be dry(ish). 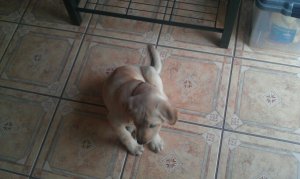 Zeus isn’t quite sure about her as yet.  She LOVES Zeus, loves him, follows him EVERYWHERE, it is quite cute.  She follows me everywhere as well but she loves him.  Zeus is still a little jealous of having another dog in the house but he’s coming around.  He started playing with her today which is good.  She’s going to be a BIG dog – the breeders are guessing 75-80 lbs so that’ll be double the size of Zeus.  He’d better be good ’cause she’ll thump him in a few months…

Perhaps I am insane getting a second dog, who knows.  I am looking forward to the adventures that will come.

Well, this is my BLOG, so, read the BLOG !!!
View all posts by kdarcy21 →
This entry was posted in Baseball, Rant and Rave, Zeus, Blondie, Hera and Twix. Bookmark the permalink.